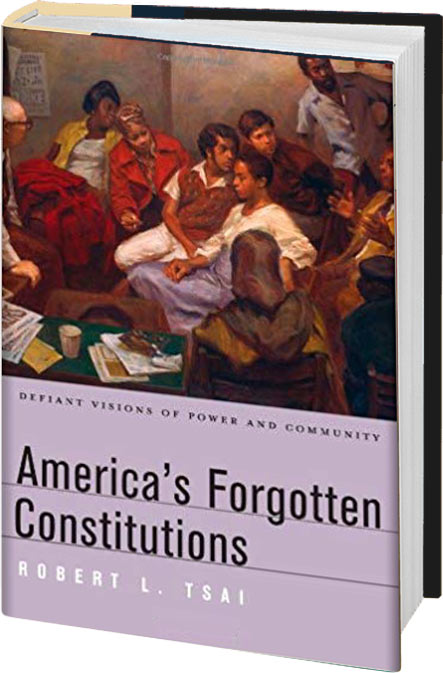 The U.S. Constitution opens by proclaiming the sovereignty of all citizens: “We the People.” Robert Tsai’s gripping history of alternative constitutions invites readers into the circle of those who have rejected this ringing assertion–the defiant groups that refused to accept the Constitution’s definition of who “the people” are and how their authority should be exercised.

America’s Forgotten Constitutions is the story of America as told by dissenters: squatters, Native Americans, abolitionists, socialists, internationalists, and racial nationalists. Beginning in the nineteenth century, Tsai chronicles eight episodes in which discontented citizens took the extraordinary step of drafting a new constitution. He examines the alternative Americas envisioned by John Brown (who dreamed of a republic purged of slavery), Robert Barnwell Rhett (the Confederate “father of secession”), and Etienne Cabet (a French socialist who founded a utopian society in Illinois). Other dreamers include the University of Chicago academics who created a world constitution for the nuclear age; the Republic of New Afrika, which demanded a separate country carved from the Deep South; and the contemporary Aryan movement, which plans to liberate America from multiculturalism and feminism.

Countering those who treat constitutional law as a single tradition, Tsai argues that the ratification of the Constitution did not quell debate but kindled further conflicts over basic questions of power and community. He explains how the tradition mutated over time, inspiring generations and disrupting the best-laid plans for simplicity and order. Idealists on both the left and right will benefit from reading these cautionary tales.

“Tsai has a good eye for what makes for a good story, and he knows how to put that good story together…One of the most captivating works on American political thought and American constitutional history to be written in the last several years.”
—Susan McWilliams, Professor of Politics, Pomona College, and co-author of A Political Companion to James Baldwin

“An enlightening, refreshing take on constitutional history that is accessible to legal veterans and newcomers alike.”
—Harvard Law Review

“Tsai’s recovery of the constitutional plans of dissenting political communities challenges our sense of a stable constitutional history. America’s Forgotten Constitutions masterfully exposes the disturbingly shaky foundations of constitutional identity; yet it also shows the (mildly reassuring) consistency of constitutional thinking, even among white supremacists, land-grabbers, and moralistic ideologues.”
—Sarah Barringer Gordon, author of The Spirit of the Law: Religious Voices and the Constitution in Modern America

“For two centuries, dissenters from the American mainstream have drawn inspiration from the U.S. Constitution―and chafed at it. Tsai elegantly maps the margins of our constitutional landscape to reveal one of the Framers’ great forgotten legacies. A brilliantly conceived book.”
—John Fabian Witt, author of Lincoln’s Code: The Laws of War in American History

“Tsai examines eight instances of dissenting constitutions written by groups representing cultural attitudes out of the norm seeking unconventional sovereignty…The author succinctly explains each of these constitutions with the thoroughness of a legal mind and writing that avoids legalese.”
—Kirkus Reviews

“Tsai has selected eight transformative legal texts to show how legality and social process interact in dissident communities and diverse settings. The documents represent an astonishing array of ideologies from utopian socialism and internationalism to Confederate and black power movements. Using an analytical framework based on categories of sovereignty and self-rule, each chapter considers the historical significance and dynamic growth of its community, culminating in marginalization or integration of its philosophies into the broader legal and political culture of this nation. The organization is historical, beginning with 19th-century social campaigns to nascent Aryan nation communities. The author successfully demonstrates the difficulties of establishing and maintaining alternative legal cultures even with strong, visionary leadership…A deft, readable investigation of this country’s complex legal traditions with lessons for contemporary fringe groups.”
—Antoinette Brinkman, Library Journal

“Offers a refreshing and innovative take on a centuries-old topic…These stories of ‘forgotten constitutions’ offer a tantalizing glimpse into the power of the written word in shaping American political discourse and ideas, both popular and philosophical, about American society. This is not merely a collection of assorted oddities or constitutional anecdotes from America’s political margins, however. Taken together, they comprise a chronological narrative of some of the key issues galvanizing political activism throughout the past 200 years of American history…By exploring the efforts of those who went beyond mere intellectual debate, and who actually tried to build alternative nations or states within the U.S., Tsai offers a unique vantage into the ideological struggles underpinning American history and politics…These constitutional efforts all represent efforts by everyday Americans to take charge of the society immediately surrounding them, express their grievances with the status quo and literally re-write the conditions of their lives.”
—Hans Rollman, PopMatters

“Engaging to read…[Tsai’s] picture is far richer than the grim founder worship usually found in American political orthodoxy…For Tsai’s constitution writers, the U.S. Constitution stands as an obligatory model, something they necessarily define themselves in relation to. All designed some sort of republic. All detailed mechanisms for ‘popular decision making, divided powers, and enumerated rights.’ And all, in the end, underline just how largely the Constitution figures in the American political imagination: less a charter of freedom than a document of power.”
—Tom Arnold-Foster, Daily Beast