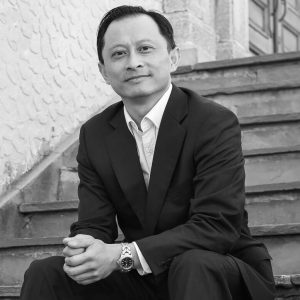 Robert L. Tsai is Professor of Law at Boston University and an expert in constitutional law, American history, and political theory. Though he was born in Taiwan, he has always considered America his home. In fact, one of the proudest moments of his life was the day he was sworn in as a U.S. citizen. Tsai spent his formative years in the Pacific Northwest, working in his parents’ cafe in charming Port Townsend, Washington, and dreaming about the world beyond his small town. He left the area for college and earned a B.A. magna cum laude in History and Political Science from the University of California, Los Angeles, where he graduated from the Honors College, was elected to Phi Beta Kappa, and received the Carey McWilliams Prize for his honors thesis on the political significance of early Christian teachings (awarded Highest Honors).

He then headed to Yale Law School, where he helped edit the Yale Law Journal and the Yale Law and Policy Review, served on the Board of the Morris Tyler Moot Court, and was awarded Honorable Mention for Oral Advocacy as a Harlan Fiske Stone Prize Finalist—after being the sole second-year student to make the final round. Upon graduating from law school, he learned the intricacies of America’s justice system by working as a law clerk for federal judges in New York and Boston: U.S. District Judge Denny Chin (later appointed by President Obama to the U.S. Court of Appeals for the Second Circuit) and U.S. Court of Appeals Judge Hugh H. Bownes (a Carter appointee who passed away in 2003).

After two years of judicial tutelage, Tsai relocated to the Deep South to become a civil rights lawyer in Georgia. Those exhilarating years working with students, clergy, protesters, prisoners, and the homeless left a lasting impression. His first teaching gig was at the University of Oregon Law School, where he earned tenure, along with awards for teaching and research from the law school and the university. Tsai has also taught at American University. In fall 2019, he served as Clifford Scott Green Chair and Visiting Professor of Law at Temple University.

Tsai is the author of three books, Practical Equality: Forging Justice in a Divided Nation (W.W. Norton Feb. 19, 2019), America’s Forgotten Constitutions: Defiant Visions of Power and Community (Harvard 2014), and Eloquence and Reason: Creating a First Amendment Culture (Yale 2008). His most recent book Practical Equality is a call to arms to do the hard work of equality, and is brimming with historical lessons for how to make social progress in tough times. It has been hailed as “brilliant” and “sensible,” a book that “portrays liberal pragmatism at its best.” The New Yorker featured Practical Equality in its January 13, 2020 issue. Joshua Rothman wrote that Tsai’s approach “may bring us closer to our moral common sense.”

America’s Forgotten Constitutions, which explores how citizens have written a wide range of alternative constitutions to resist mainstream constitutional law, has been called “captivating,” “magisterial,” and “a remarkable feat of excavation.” Eloquence and Reason, his book on the development of America’s free speech values, has been described as “fresh,” “sophisticated,” and “compelling.”

He is hard at work on his next book, which focuses on the constitutional politics surrounding capital punishment. Turning to the period of American history from the late 1960s to the present day, Tsai’s new book project examines how anti-death penalty advocates in the Deep South sought to resist the worst features of tough-on-crime policies. Ask the Impossible: One Man’s Question for Equal Justice explores the life and times of Stephen Bright, who revived an organization founded by civil rights activists and turned it into a powerhouse group that represents individuals charged with serious crimes and languishing in America’s worst prisons and jails. The book will be published by W.W. Norton in 2022.

Tsai’s research spans constitutional law, legal history, democratic theory, American political culture, social movements, criminal procedure, presidential leadership, and radical constitutionalism. He has written about the legal obstacles placed in the way of black civil rights activists, President Franklin Roosevelt and freedom of religion, the philosophy of John Brown and his followers, modern white supremacy and the militia movement, the Republic of New Afrika’s ideas about the Constitution, the historical treatment of migrants, early socialism in America, the rise and fall of the “one world” movement, President Obama’s reversal on same-sex marriage, and ideas of equality in the poetry and fiction of Langston Hughes.

Tsai splits his time between Boston and Washington, D.C. He is a black belt in Tae Kwon Do and is a life-long fan of college basketball and comic books.